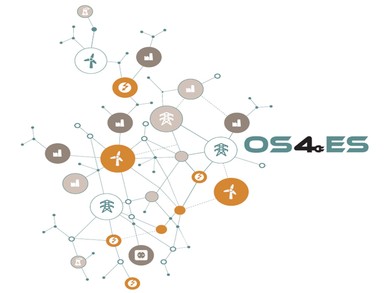 OS4ES is a STREP project (“Open System for Energy Management”) co-funded by the European Commission under the FP7 Programme / Objective 2013.6.1 “Smart Energy Grids”. The OS4ES project will be coordinated by FGH. It started on July 1st, 2014, its duration will be 36 months and it has a total budget of 4,3M€.

The mass and ever increasing presence of grid-connected distributed energy resources (DERs) causes a number of adverse effects on the reliability and robustness of the electricity grid. Their distributed and intermittent power generation capabilities and novel characteristics such as energy storage introduce new challenges to the Smart Gridand severely complicate or even compromise the network management by distribution system operators (DSOs).

The OS4ES project aims to tackle this problem by closing the current information, communication and cooperation gap between DERs and DSOs. It will provide an Open System for Energy Services for Smart Grid actors (DSOs, BRPs, Retailers etc. acting as aggregators) to enable dynamic and automated integration of millions of DERs, including electrical vehicles, private or commercial PV plants, small/medium /large wind power plants as well as privately and commercially owned CHPs, into the electrical grid. This open system with plug & play interfaces based on international standards will provide Smart Grid actors with an ideal means of monitoring and controlling the enormously high numbers of DERs on-the-fly that otherwise would need to be addressed “manually” one by one in a very ineffective and time-consuming way.

The Open System for Energy Management will be based on the Service Oriented Architecture model to offer key services to Smart Grid actors with unparalleled scalability and interoperability. Services will include the coordination, reservation and exploitation of aggregated DER flexibility through the formation of Virtual Power Plants and will be offered as cloud-based grid management services to DSOs and Aggregators for Smart Grid robustness and reliability enhancement.

The OS4ES system will be based on standardized and interoperable communication interfaces, as well as generic interfaces among DERs that produce, consume or store electrical energy and Smart Grid actors, like DSOs, Aggregators, BRPs, etc. Novel business models, use cases and service scenarios will be explored during the project based on the exploitation of DERs for the optimal management of Smart Energy Grids enabled by the Open System. Extensive laboratory tests and focused field validation in carefully selected urban areas in the Netherlands will be conducted to demonstrate the Open System’s value to key Smart Grid stakeholders and the interested public.

To this end, an OS4ES Industrial User Group has been already established before the project initiation and will be further extended during its execution. Founding members include Energinet.dk, Ericsson Croatia, Hamburg Energie, Phoenix Contact, Senertec, IDS, E.ON Ruhrgas, IFAK and ABB Switzerland. User Group members will provide feedback to project work and will in turn profit from access to project results before publication. Since the project aims to steer future standardization efforts, this privileged access will enable them to gain a head start in the development of Smart Grid enabling components before respective standards (e.g. IEC 61850-7-420) are released in their final versions.